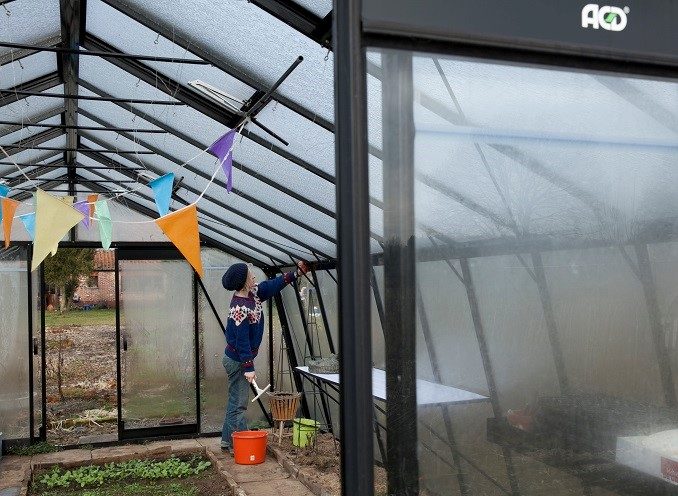 In February, the weather can go in almost any direction, it can freeze, it can thaw and there are certainly days in which spring is already in the country. It is then rather difficult for the vegetable gardener to restrain himself from sowing already. You will know that like no one else.

If your vegetable garden is on sandy soil, just like mine, you can certainly sow some seeds here and there; spring onions, broad beans, spinach… Light soil retains much less moisture and therefore dries faster so that sowing can take place earlier. Clay and loam soil gardeners should better restrain themselves until their soil has dried and warmed up sufficiently. It is sometimes said that sowing is only allowed when it is no longer too cold so that you can sit with your bare behind on the ground. A little test?

But, where you definitely would not have to restrain yourself is in the greenhouse. If you still sowed spinach, lamb’s lettuce or other type of leaves after the tomatoes last year, you can now even accelerate by sowing and planting peas, radishes or even cauliflower. In most cases, a greenhouse can be used much more efficiently, especially if you only limited yourself up to now to the typical summer crops, such as tomatoes, paprikas and cucumbers. Allowing crops to follow one another faster is not only good for increasing your yield, it also keeps your soil in better condition. All those fine leaves and plants need water and that water washes away the salts that formed during the summer due to the shortage of water. You can prevent salinisation of the greenhouse soil with one or two buckets of water per week per square meter. That is already one less problem.

What else can you still sow?

There are two things that you have to take into account. The lifespan of a vegetable and the crop rotation. Where the tomatoes appear in April or May, it is only possible for fast-growing crops, such as spinach, mustard, rocket, radishes, … to be planted at the moment. But, in beds where vegetables are planted out only later on, a lot more peas, broad beans, beetroot, carrots … can be planted now.

You also don’t have to get rid of everything every time one crop comes to an end, or the next one has to go in; for example, this year I planted the cucumbers and pickles between the broad beans and the snow peas, which can continue to grow a little further (or dry), while the cucumber plants are only small and do not take up much space. When the broad beans and snow peas have been harvested, I cut the plants into pieces and leave them as mulch. All pulses store nitrogen at the roots and release it again when they digest; that will only make those cucumbers very happy, win win! However, make sure that the young plants that you put between large plants are not displaced and that they have sufficient light and air; if necessary, you can cut a few plants at the place where the cucumbers will go into the soil.

You can still apply this type of combination/intermediate crop to other greenhouse vegetables. I still sow radishes around the cauliflowers, because there is still a lot of empty space around these cabbages in the first weeks. And between two rows of beetroot, fennel or kohlrabi, a row of spinach, coriander or turnip can still easily fit in during the first few weeks. What you have to take into account in such an interim crop is the crop rotation; immediately our second point on the agenda!

Just like in the vegetable garden, you must also take into account the crop rotation in the greenhouse, cultivating the same vegetables in the same place, year after year, can lead to various problems. Coincidentally, tomatoes, peppers and cucumbers are less susceptible to this, but it is better to plant cabbages, pulses, potatoes and carrots in the same place only every 3-5 years. Invest some time in a good plan and move the crops up one bed each year. Also keep notes in a vegetable garden diary, then anything can hardly go wrong.

And what would all this explanation be without a list of vegetables that can still be sown?!

A warning: Before sowing, first read the back of the seed packet; there is early and late leeks, carrots, cauliflower, etc. It is now far too early for bush beans, but broad beans and peas can already be sown.

In the open ground

In large pots, trays and bags > Everything stays in here until you harvest it
Lettuce (mixtures), radish, spring onion, shallot (for the greens), pea shoots, parsley, carrots, beets, potatoes, strawberries

The greenhouse in February

It is a great convenience to have extra sowing space available in the spring!